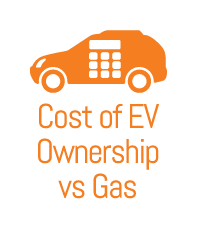 In the summer of 2008, gasoline prices reached above $4 per gallon. Today, prices remain volatile, and substantially higher than electricity costs. Increased household spending on gasoline eats into individuals’ and families’ budgets for other items, straining already tight budgets.

Vehicles powered by electricity now provide drivers with another option. Electricity is generated by a diverse set of primarily domestic energy sources including hydroelectric, wind, solar, natural gas, coal, nuclear, and geothermal. Its price has historically been much more stable than oil. As a result, fuel costs for an electric vehicle are typically around 70 percent lower than those for the average gasoline-powered vehicle. When gasoline prices rise, this comparison becomes even more favorable. For example, at a price of $3 per gallon, a gasoline-powered vehicle that can travel 30 miles per gallon of fuel costs approximately 10 cents per mile. At 10 cents per kilowatt hour, a typical electric vehicle costs approximately 3 cents per mile. Even versus the most efficient gasoline-electric hybrids, fuel costs for electric vehicles are at least 40 percent lower. Electric vehicles also benefit from lower maintenance costs thanks to a combination of regenerative braking (which reduces wear and tear), fewer moving parts, no fluid replacement, and other features. Use our Comparison Calculator to see how much you could save by switching from a conventional vehicle to a plug-in vehicle.

Although the upfront costs of electric vehicles can be higher than conventional vehicles, these costs are falling, and the combination of lower fuel and maintenance costs, and federal and state incentives, make them an attractive option for many drivers. Consider for example a comparison between the Nissan LEAF and Nissan Versa Note (although there are some upgrades included, the primary difference between these vehicles is the electric versus gasoline propulsion). The LEAF costs $30,680 and the Versa Note $15,480 a $15,200 increment. However, once the federal tax credit ($7,500) and New York Drive Clean Rebate ($1,700) are applied, this incremental cost is reduced to only $6,000. Thus, annual fuel cost savings estimated at nearly $900 for drivers traveling an average 12,000 miles will quickly recover this incremental cost. Higher average gasoline prices will result in even more savings for the EV driver.  For more information on Federal and State incentives available for plug-in electric vehicles, see Incentives.